There are not many things that compare to the feeling of sailing in a World Championships with 19 other boats who are just as excited as you are—especially in a place as beautiful as Salinas, Ecuador. Last week the 2016 Lightning Youth Worlds wrapped up with a decisive victory from Team Rondina of Brazil, and two points separating 2nd through 4th place. With the Worlds over with, some of these teams like Team Wake have now set their sights on the Samson 2016 Junior North American Championships. Doug Wake and his crew Noah Bartlet and Meredith Ryan finished 7th in Salinas, and now they’re ready to take on Rochester.

First off, how was your experience at the Youth Worlds? What was your favorite part of the event?

“Sailing the Worlds was absolutely awesome. Salinas Yacht Club and the sailing conditions were better than I could’ve asked for. We had consistent breeze all week. Also, the did a great job and had the most evenly matched fleet of Lightnings I have ever seen. My favorite part was seeing the international teams warm up to each other. By the end of the event, the camaraderie was incredible.”

Seventh place is a great finish in that type of a fleet. How are you feeling going into the Junior NAs? Are there things you did in Ecuador you can improve upon?

“I’m sailing the Juniors with the same team I sailed the Worlds with, so I guess the best term is cautiously confident. I know that my team has improved by leaps and bounds throughout the year, and we have consistently been able to beat most boats that will be at juniors, but there are a lot of other talented sailors who will be right in it. Rob Robinson, Ben Folds, Carter Cameron… I think that with the small fleet, our greatest weakness, starting, will be better. I also grew quite a bit tactically in Ecuador, so I am more confident in fleet management. We are fast, so tactics are the last piece of the puzzle. Hopefully this will be simplified in the smaller fleet.” 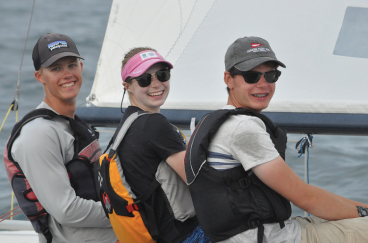 So with the smaller fleet, how do you think there can be the same camaraderie as the Worlds fleet?

“I think that a lot of that camaraderie is already there. The majority of us have known and been sailing against each other for years, so there is already a bond. The sad thing about the NAs is that there isn’t the “we are on some crazy vacation and let’s have so much fun” vibe. More people are there to compete. Also at the worlds, all the competitors were at one hotel, so that helped. I think that the organized events— amusement park, volleyball—will be helpful in making sure the teams are close to each other. Once the teams are actually together, everyone will pick up where they left off.” 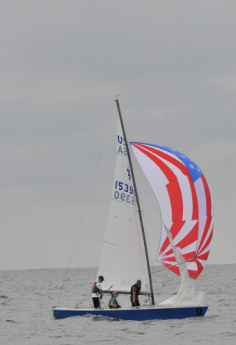 Sounds like you’re head of the social committee, then! One final question for you, Doug. Do you see a difference sailing in the Lightning Class versus other classes you’ve competed in?

“Definitely. I haven’t had a vast experiences in too many classes but here is what I know. In the Club 420 class, it is all kids. In theory, everyone should be hanging out, kicking back, and enjoying themselves and all the other young people. That isn’t how it works. Teams cling to their members and coaches, staying away from sailors in other areas. In the Lightning Class, sailors all become friends with each other, no matter where they are from. The fleet is generally a lot closer. The other difference I see in the Lightning from other classes is that the interaction between adults and junior sailors is significantly better in the ILCA. The future of the class is bright, and I believe that older members genuinely care about getting young sailors both sailing and up to speed. It is rare to see a junior team on land without an experienced Lightning sailor helping them figure out how to tune, what to do better on the race course… This is very important for the class and something we are doing very well.”

We can’t wait to see how Team Wake and the rest of the Junior boat do at the Junior North American Championships! Best of luck to all our Junior competitors, and most of all, don’t forget to have fun!

Still looking for crew? Wanting to crew and don’t have a boat? Sign up at the logistics board!